In 1984 I did a series of 80 daily comic strips that explained my banking solution — and if I had managed to get them syndicated, my BRIGHT IDEAS strip might have been the most important comic strip ever printed — I wanted to share my ideas and initiate a nationwide discussion, but these strips were never published. For the first time in over 20 years I am posting them on the Internet so everyone can now see them.

Back in the early 1980s Stephen King’s THE SHINING was very popular (oh yes, I’ve read the 2013 sequel DOCTOR SLEEP!) — here are a couple pics I took of him when he came to Berkeley for a convention — a fan had made him a shirt that said “OVERLOOK HOTEL, RECREATION DIRECTOR” which I thought was extremely clever…

…so I made myself a shirt that said

and when I did my BRIGHT IDEAS banking strips I drew myself into the strip wearing my “FINANCE DIRECTOR” shirt! 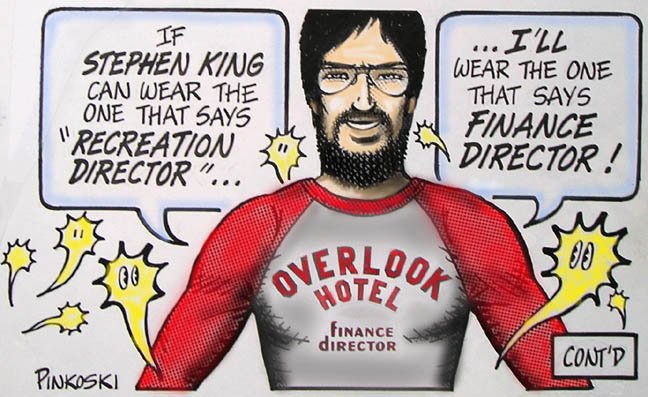 BELOW:  Here are my BRIGHT IDEAS strips that explain my banking solution!

Enjoy reading them, and then let’s talk!…

(And remember that the idea here was to make this comic strip both “serious” and somewhat simplified so that it would be fun to read so everyone could follow it! And please excuse the occasional misspelled word, they happen now and then….)